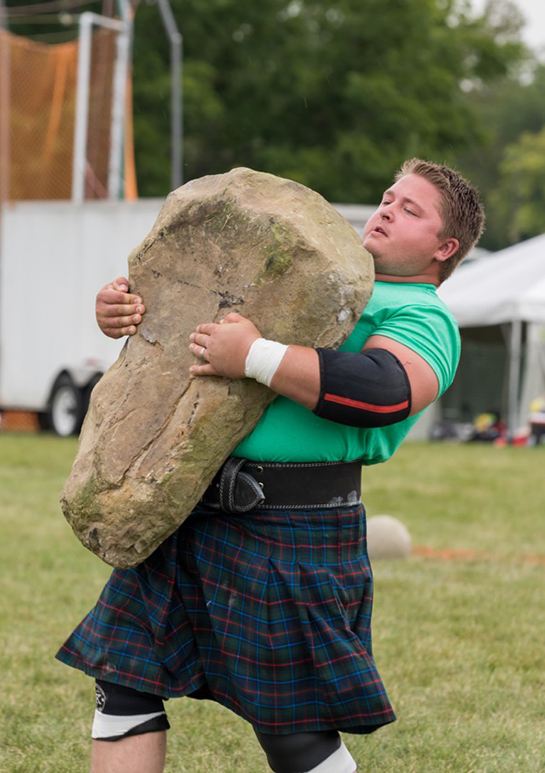 This event is organized by the Great Lakes Scottish Athletic Association. For more information or to submit an application to compete, visit https://www.glsaagames.com. 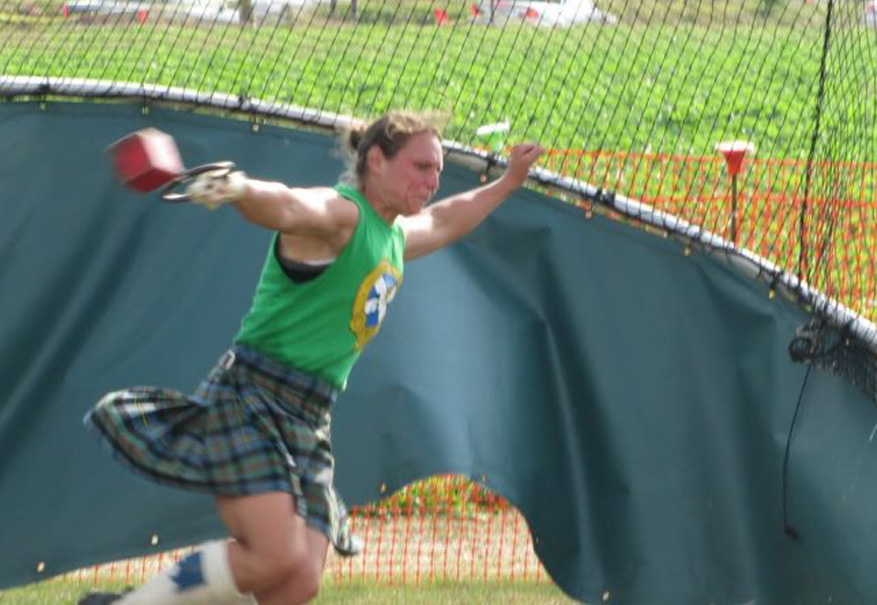 There are two separate events, one using a light (28 lb. for men and 14 lb. for women) and the other a heavy (56 lb. for men, 42 lb. for masters men, and 28 lb. for women) weight. The weights are made of metal and have a handle attached either directly or by means of a chain. Only one hand can be used to throw the weight. A variety of throwing techniques are employed to maximize the distance of the throw. A spinning approach is most popular. The longest throw wins the event. 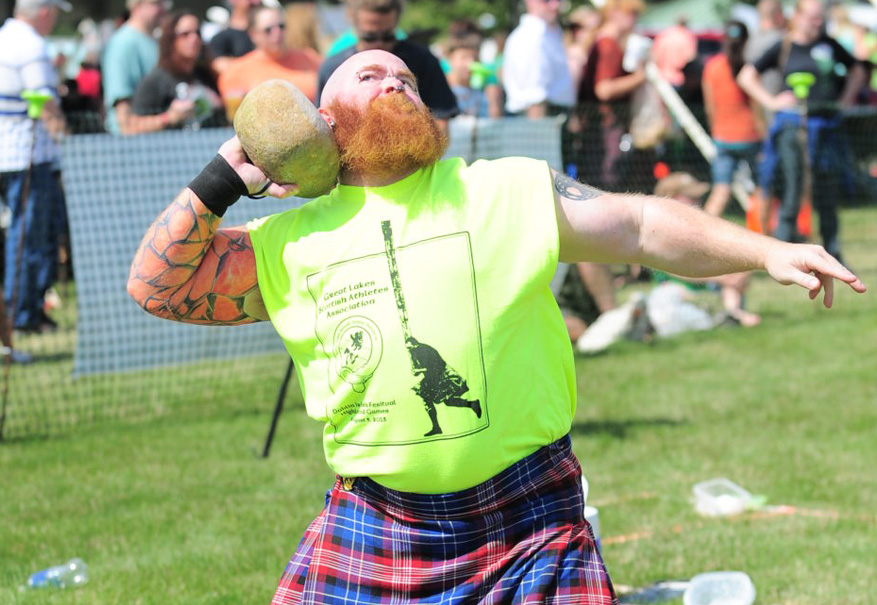 This event is similar to the modern-day shot put as seen in the Olympic Games. Instead of a steel shot, a large stone of variable weight is often used. There are also some differences from the Olympic shot put in allowable techniques. The “Braemar Stone” event uses a 20–26 lb. stone for men and a 13–18 lb. stone for women. No run up to the trig (toe board) to deliver the stone is permitted.

In the “Open Stone” event men use a 16–22 lb. stone and women use a 8-12 lb. stone. Unlike the Braemar Stone put, the thrower is permitted to use any throwing style so long as the stone is put with one hand and rests cradled in the neck until the moment of release. Most athletes in the open stone event use either the “glide” or the “spin” techniques. 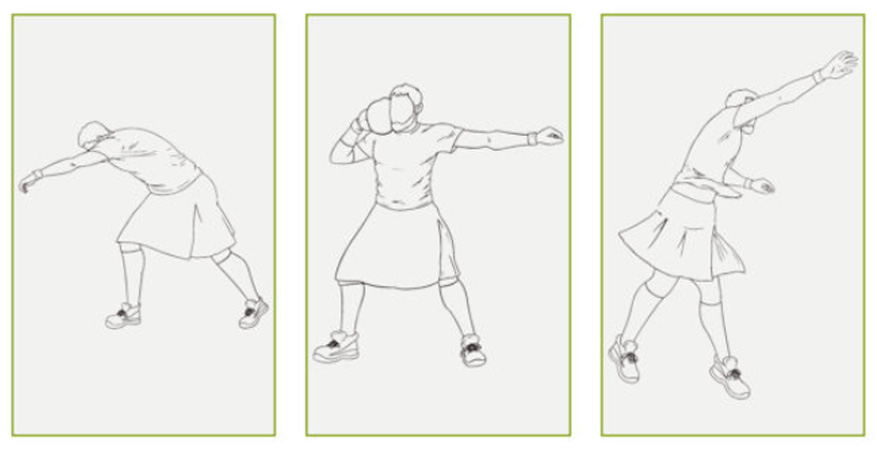 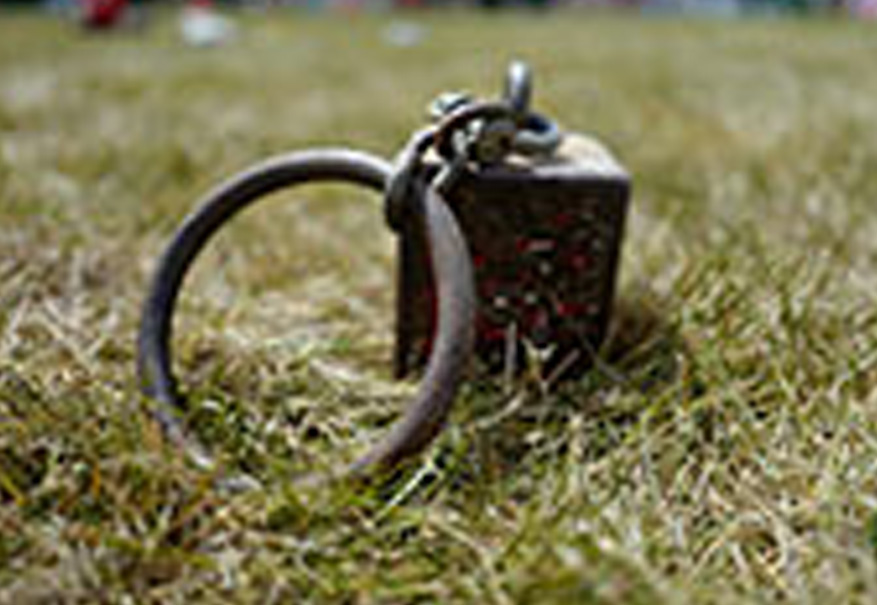 Also known as “Weight for Height”, the athletes attempt to toss a 56 pound weight with attached handle over a horizontal bar using only one hand. Each athlete is allowed three attempts at each height. Successful clearance of the height allows the athlete to advance to the next round at a greater height. The winner is determined by the highest successful toss. The athlete with the least attempts wins in the event of a tie. 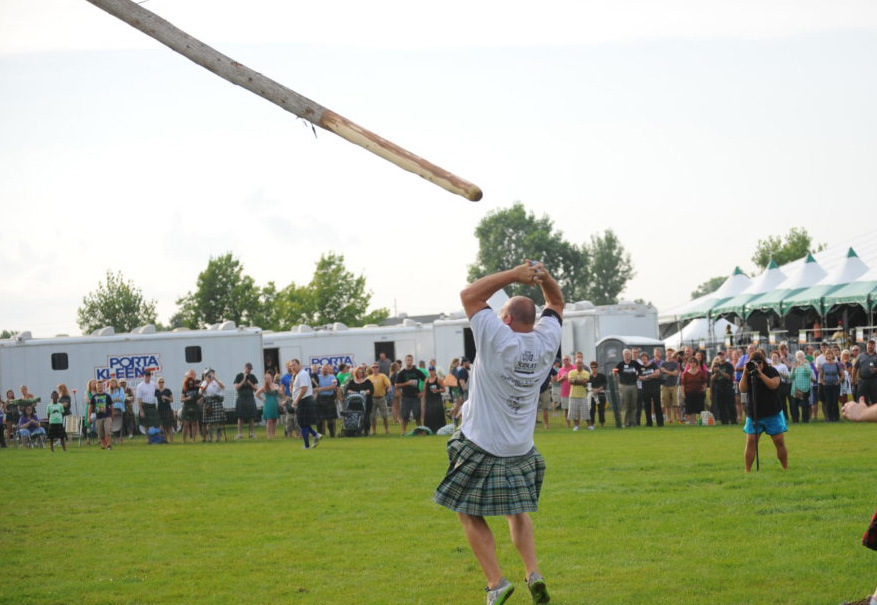 A long tapered pine pole or log is stood upright and hoisted by the competitor, who balances it vertically, holding the smaller end in his hands (see photo). Then the competitor runs forward, attempting to toss it in such a way that it turns end over end with the upper (larger) end striking the ground first. The smaller end that was originally held by the athlete then hits the ground in the 12 o’clock position, measured relative to the direction of the run. If successful, the athlete is said to have turned the caber.

Cabers vary greatly in length, weight, taper, and balance, all of which affect the degree of difficulty in making a successful toss. Competitors are judged on how closely their throws approximate the ideal 12 o’clock toss on an imaginary clock. 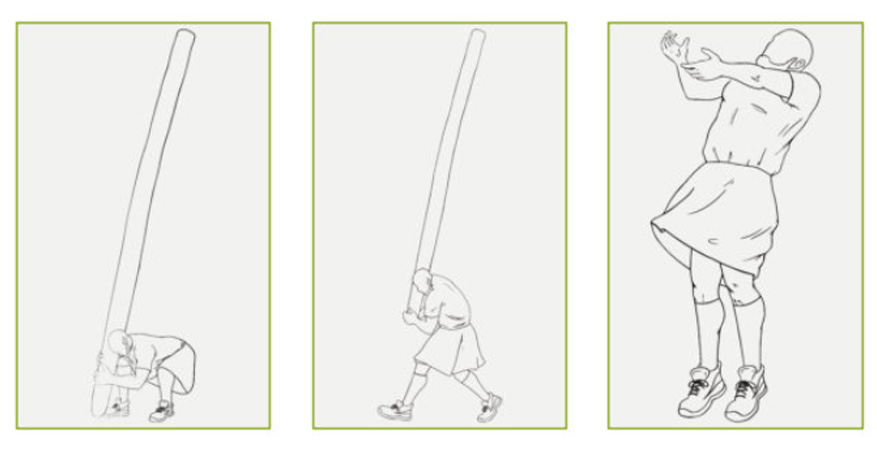 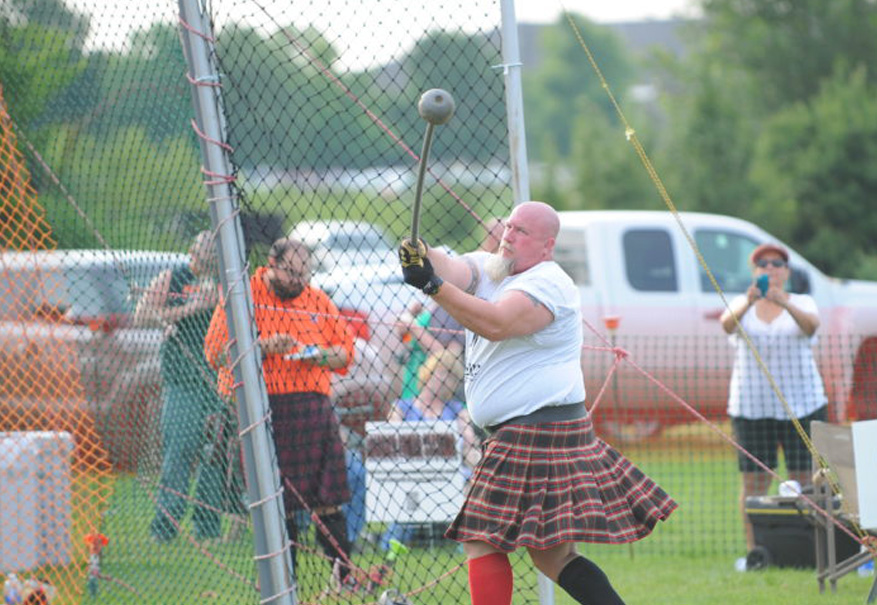 The hammer consists of a block or ball of metal attached by a handle made of either rattan or PVC pipe. This allows it to flex and the athlete to develop greater amounts of speed when tossing it. The hammer throw is broken down into two categories, light and heavy. For the Men’s divisions, the light hammer is 16 pounds and the heavy is 22 pounds. The Women’s hammers are 12 pounds for the light and 16 pounds for the heavy.

The athlete starts from a standing position with his or her back facing the trig (toeboard). They may not move their feet until the hammer is released, and they may not step on or over the trig at any time. The athlete will wind the hammer in a circular motion, building up speed, and then releasing the hammer over their shoulder. The distance of the throw is measured from the center of the trig to the part of the hammer that hits the ground closest to the trig. 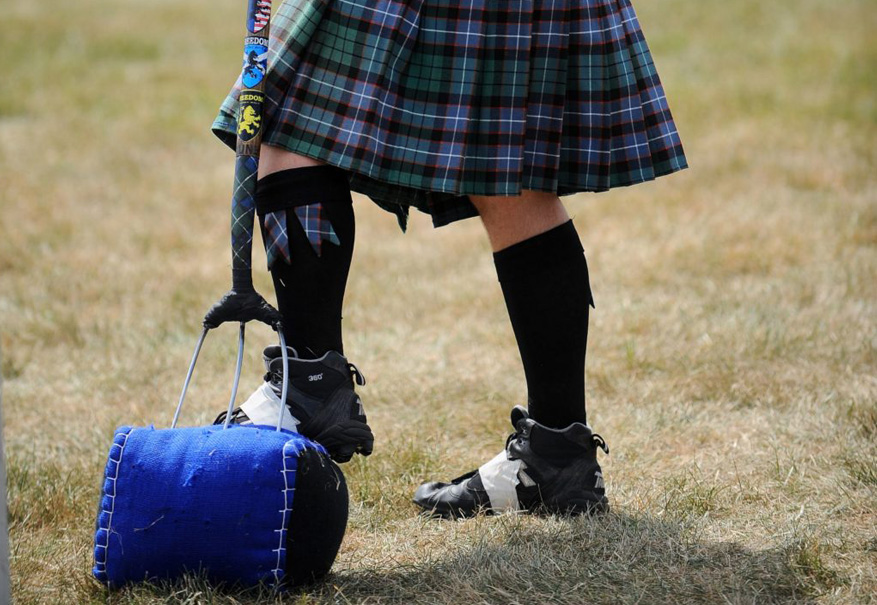 Seminars are presented by Wade Wilcox, a member of the 1995 World Cup team and a competitor on the national and international darts circuit. Wilcox explains the equipment and rules, demonstrate throwing techniques and discuss the history of darts in Ireland. 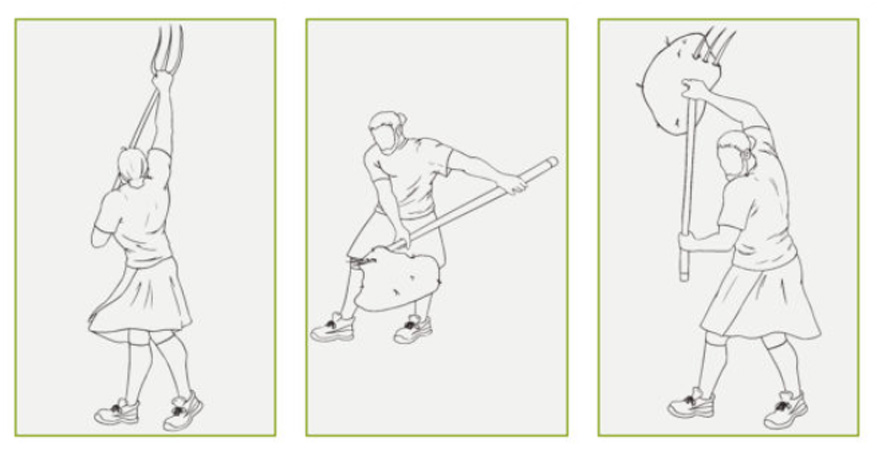 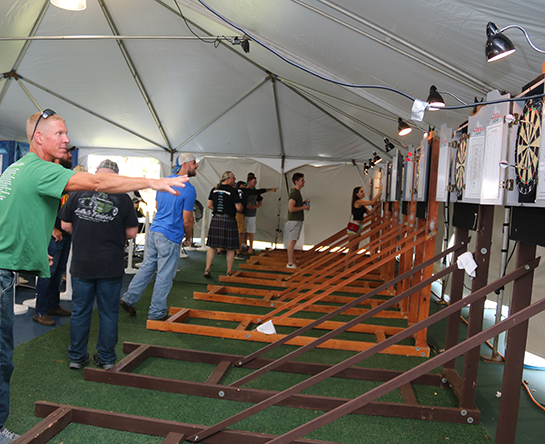 Seminars are presented by Wade Wilcox, a member of the 1995 World Cup team and a competitor on the national and international darts circuit. Wilcox explains the equipment and rules, demonstrate throwing techniques and discuss the history of darts in Ireland.

Cash prizes and trophies are awarded for top finishers. Registration starts at 6 p.m. on both Friday and Saturday. The entry fee is $5. 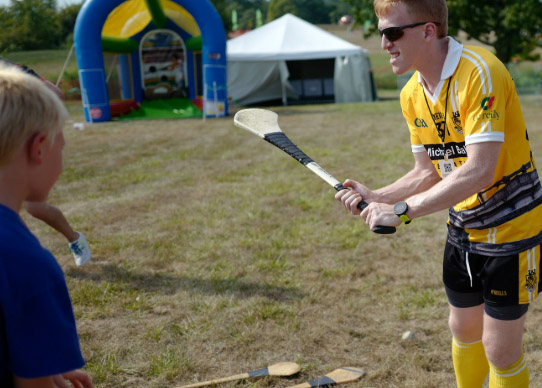